On August 15th I had posted a story saying that I was going to use Windows more frequently, and that I was even going to learn how to program for Windows. Let’s see how it’s going:

Of all the differences between Windows and Linux, the one I notice the most is the lack, in Windows, of the “primary selection”. That’s the technical term for the X-Window feature that allows you to select some text with the mouse and then paste it anywhere pressing the mouse wheel. I use that all the time in Linux, so in Windows I always forget to press Control-C and Control-V to copy and paste.

As I said before, I’m also learning how to program for Windows. At first I had downloaded Visual Studio C++ Express Edition (as it is free of charge), but it has so many limitations that it did actually get in my way. Fortunately, in Microsoft’s web site there’s an evaluation version of Visual Studio Professional Edition, which has all the features but also a 90-day limit, so I downloaded it (3 GB) and I’m using it now.

The program I’m writing is a Twitter client. Writing this program will allow me to work in many different parts of Windows, such as the user interface, network communications, APIs for interpreting XML and working with graphics, etc. It will be quite hard because I have to learn everything as I go, but I already managed to write a program that displays a window and can download data from Twitter and show it in the window in the same XML format it was received from the server in: 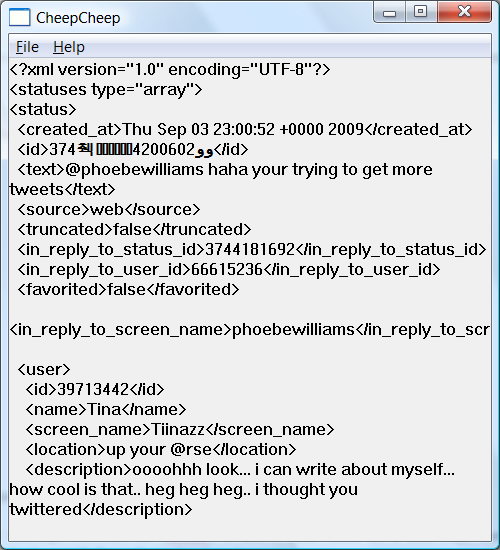 Ah, and I also played (and finished) World of Goo. That’s a game about joining balls of goo forming structures to achieve an objective. It was made by four people on a 10,000-dollar budget, and it was very successful. It is truly a beautiful game, and it’s worth it. Ah, and it works on Windows, Mac and Linux (and there are demo versions for the three architectures).